When my daughter Jessica was 13 months old, her mother and I divorced.  This had a big impact on her.  They say that children who undergo early separation trauma are affected in a challenging way.

During infancy, some child psychologists say that babies “can feel tension in the home (and between their parents) but can’t understand the reasoning behind the conflict.”

Their memory reflex (ego) is in a dormant seed state and trauma happening this early, I feel, can affect a child’s development in ways that are difficult to understand.

In fact neuro-scientists and attachment-researchers have found that during the first 2-3 years of life it is vitally important to have a stable emotional environment.  Even for parents that are not divorced, this is challenging.  Conflict and violence, whether physical or emotional create varying levels of disruption and insecurity in children, who later learn to use dysfunctional, compensatory-attachment patterns.

Jessica was born with congenital lung issues, a mixture of emotional sensitivities and physical predispositions. Like all human body frame sensitivities and patterns, these issues can also be exacerbated via environmental factors, like chemical toxicity, food additives, tree and flower pollen in the air and many others.

According to Chinese Medicine the lung energy channel system (including the physical organ) stores our unmet sadness, grief and is intimately linked to depression (along with the spleen channel).  When someone has issues with their lung, generally it makes them more sensitive to sadness, grief and depression.  And the opposite is true, if we feel sadness, grief and/or are depressed, it weakens the lung energy, which makes us more susceptible to lung ailments.  This can be a challenging circle to step out of.

My care-giving client’s handyman has 3 year old daughter.  They had just returned from a  doctor’s appointment.  He told me that she was diagnosed with an ear infection and also had ‘a touch of pneumonia in her left lung.’ (Interestingly the Kidney is tied to the ears and is considered as a vital part of the in-breath (taking in) and the Lung more the out-breath (letting go)–according to Chinese Medicine).

I began to talk about the emotional correspondences related to the lung energy system. He mentioned that his daughter’s had lung issues beginning in the first few months of life.  My client’s handyman told me that he split up with his child’s mother during this time.  It makes sense that separation/divorce trauma and lung issues with children may often correspond.

I showed my handyman friend a simple acupressure routine that involves massage work along the entire lung channel that runs from the sternoclavicular meeting point, on the side of the chest near the upper arm and travels down the arm all the way to the thumb on both arms.

His daughter let me trace the lung channel on her. She was open and focused, watching me intently in silence as I gently stroked her arm and talked to her father. 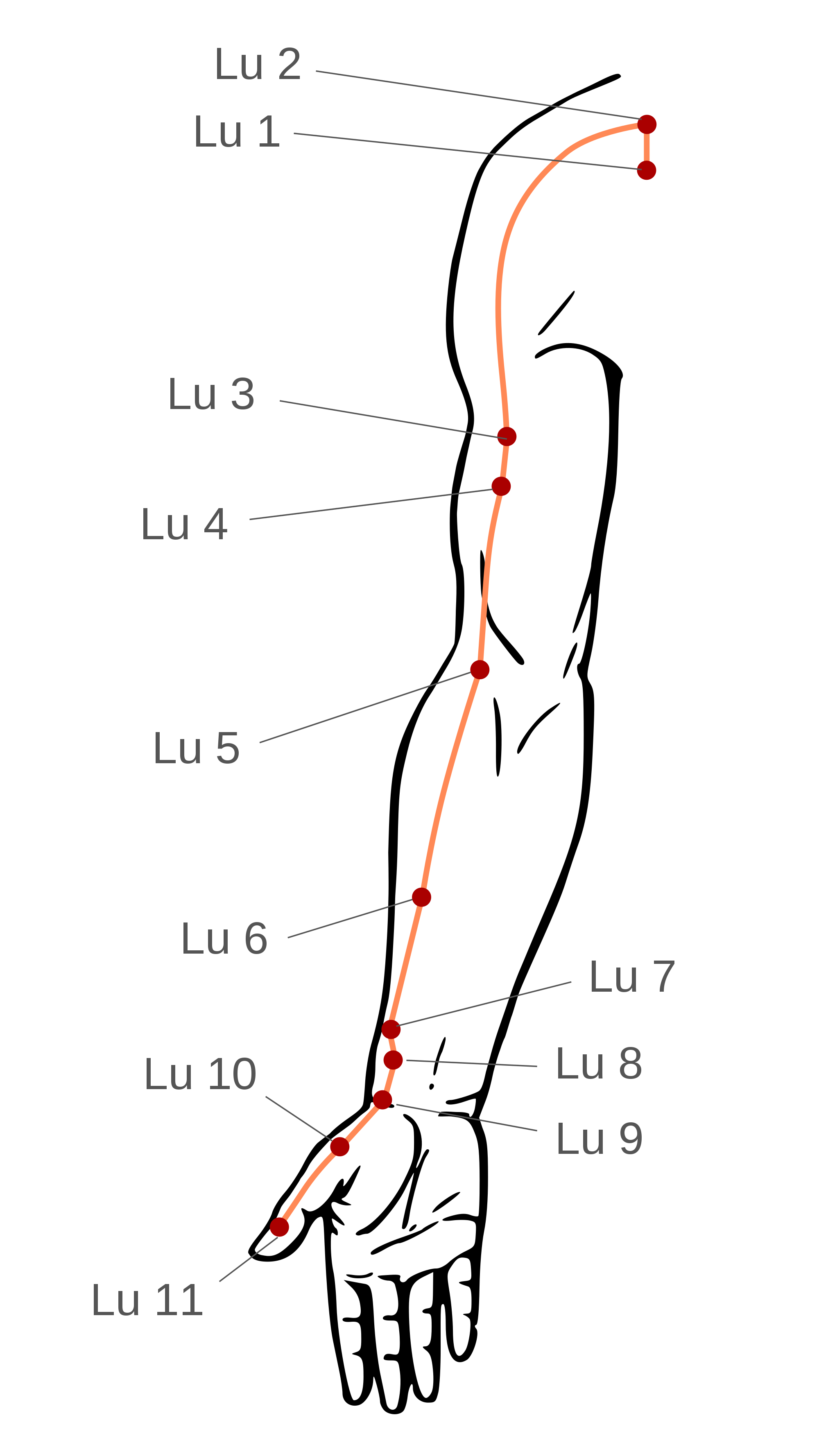 The lung channel does have 11 points of power but anywhere along the channel, a place of congestion or blockage may be located.  The more you practice acupressure, the more in tune you will become with the way the channel feels at particular areas, including: sensitivity, pain and emotional responsiveness.

Taking a few minutes each day (or several times a day during illness) to work on the lung channel via acupressure allows for powerful energy healing, helping us balance the entire body-mind-spirit and resolving the root imbalance which may be affecting us emotionally, energetically and physically.  If we further discuss why acupressure along the lung channel helps and use the lung healing sound “ssssssss” as we exhale out old stale energy from our lungs, and finish the session with prayer or meditation with our child, the treatment is enhanced even more.

Besides, giving and receiving acupressure with our kids is fun.  And it feels good and brings relief from inner tension.  Both of us can then dissolve any remaining past trauma as our hearts heal together in this simple, yet beautiful way.